A charming cottage in Midtown! 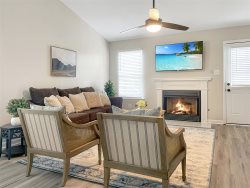 Comfy Condo in the Heart of the City!
AUGUSTA WEATHER

Enjoy your stay in Augusta at a cozy 1930's cottage in the historic Pendleton King neighborhood.  This home has been recently renovated to include new flooring & windows, and a fully modern kitchen. You'll be a short drive away from The Augusta National Golf Course (4 miles), The Augusta Regional Airport (7 miles), Plant Vogtle (31 miles), and Downtown Augusta (2.5 miles).

Enjoy the comforts of home--in style--with an inviting front porch (and swing!), large formal dining room, fully renovated kitchen, washer & dryer, and desk/work space. This chicly-styled  cottage accommodates sleeping for up to six people. Three Bedrooms include: 2 Queen Beds, 1 Full Bed and 1 Full Bathroom. Private parking available for up to 3 cars in back.
Inquire about monthly rates for corporate stays and traveling nurses.

Traveling with your pets? Enquire today about bringing your furry friends along for your trip!

Welcome to Augusta, Georgia.  You have chosen to stay at a newly renovated cottage that has quite an interesting  history. The land on which this house was built was originally owned by George Walton, one of the signers from Georgia of the Declaration of Independence.  As Augusta expanded in the early Twentieth Century, many of the original plantations were absorbed into the cityscape and this house and neighborhood were part of that early urbanization movement.  The house was built around 1930, at the start of the Great Depression and was owned by Earl and Eleanor Bell.  Mr. Bell was a highly popular and well regarded journalist who at the end of his career was honored to be chosen to write the history of the Augusta Chronicle, the "South's Oldest Newspaper."  As a sportswriter, he was a close friend to Ty Cobb, the "Georgia Peach," who lived for many years at 2425 Williams Street, about a mile from this home.  Mr. Bell  also knew, and was perhaps a ghost writer for, Erskine Caldwell who wrote the bestselling novel "Tobacco Road," which had as its setting rural areas south of Augusta.  Mrs.Bell, a legal secretary, lived in this house for almost sixty years.

Nearby,  is Pendleton King Park, a 64 acre bird sanctuary and truly lovely garden spot.  The park was founded by the parents of John Pendleton King, a World War One veteran who died tragically at the age of 29. The Kings were wealthy Augustans who created the park as a memorial to their only son.  It is a place of quiet reflection and beauty and we urge you to take some time to explore this hidden treasure just minutes from this house.  Like so much of Augusta, the park is especially radiant in the springtime of the year.