Mod in the Garden City

Perfect for business and leisure travel! 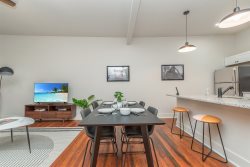 Get Up, Downtown!
AUGUSTA WEATHER

This quaint cottage combines vintage charm with modern amenities. The space and location are ideal whether you are making a quick trip to the Garden City, or unpacking your bags for a longer stay. You'll be a short drive from the Augusta National, Downtown Augusta, Augusta Regional Airport, Augusta University, and the medical district.

Two bedrooms offer queen-sized beds, and there is an attached room that can be used as an office with fold-out sofa, sleeping one adult, or two children. The home was recently renovated to include updated appliances, fresh paint, and fixtures--all while maintaining the original charm of this 1930's cottage. Guests will find a large eat-in kitchen, dining room, and a cozy porch off the main living area. Those who are traveling with their pet(s) will enjoy the fully fenced backyard. Other amenities: wifi, smart tv, washer & dryer.
Monthly rates available for corporate stays and travel nurses. Inquire today!

This home was built as part of a suburban development in the years immediately before World War Two. The property was once part of the King Plantation which was originally owned John Pendleton King, one of the most influential men in Georgia history. King was the founder of the Augusta Canal and the Georgia Railroad. His son, Henry Barfield King, inherited the land in 1888 and lived on these grounds until the King Mansion burned in 1910. His son, John Pendleton King II, was a World War One decorated veteran who tragically died in 1919. The land was then partially developed for housing ten years later. This house was then part of the King Woods Subdivision. When new, the bungalows on King Woods Drive could be purchased for less than $5,000.00! The bungalows were solidly built and have survived as an intact neighborhood. Henry Barfield King established a bird sanctuary as a memorial to his son on part of the land which eventually became Pendleton King Park. It is minutes from this house, and we strongly urge you to take the time to explore this beautiful retreat. It is a place of tranquility and solitude, and in springtime radiates with magnificent floral plantings.